I have an endless curiosity about religions, sparked  by learning a little about different religions in my high-school history class.  To me, all religions are equally fascinating and worthy.

So, when I first heard about Thaipusam I knew that I would have to see it for myself.

Thaispusam is (according to the font of all wisdom, Wikipedia) a Hindu celebration which is celebrated mainly by Tamil’s.  Devotees walk a pilgrimage carrying a burden (kavadi).  A kavadi can be as simple as a pot of milk (often held on the head) to the other extreme of self mortification where the devotee is pierced with spears.  Devotees undergo an intense preparation that includes fasting and celibacy for weeks leading up the the festival.

Which sounds gruesome and macabre.

It was an absolute honour to witness this spectacle.

It was joyous and dignified and amazing.

I had assumed that it would be a “men’s only” event but the whole family are involved in preparing themselves or a relative to carry their kavadi.  Along the 4.5km path the family and friends sing, dance and play music to encourage the kavadi wearer to continue their pilgrimage. There are also food stalls along the way to gain some much needed sustenance.

I expected to see suffering, but I saw only pride and joy.

I expected to feel like an outsider, but I didn’t.

Inside the temple I felt welcome and respected.  I was never made to feel like I was encroaching on a sacred ritual.  The participants were happy to have onlookers present and didn’t seem at all bothered by Westerners taking their photos.

As strange as this may seem (and I’m not really sure that photographs can capture it) it was beautiful.

The joy that filled the air, the magnificent colours of the sari’s, the smell of the incense, the happy people,  the chanting and singing all combined to create a truly magical atmosphere. 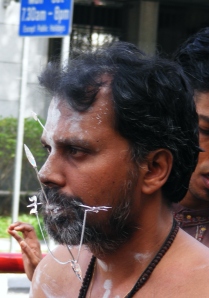 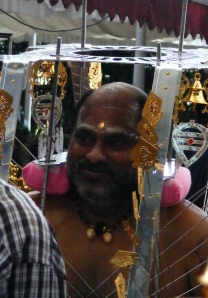 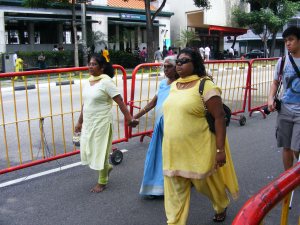 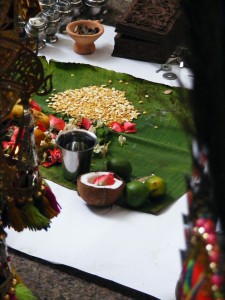 I’ve seen and experienced a lot since we moved last May but this has to rank as one of the most impressive things I have seen. Ever.

Next year I hope to walk the whole path.

12 thoughts on “Thaipusam in Singapore”

Anything to add? I love to hear your thoughts! Cancel reply